My first visit to Lake George was in 1900. This trip was followed by many excursions and these became more frequent when I started camping with my own canoe, July 4, 1907, on Black Mountain Point. After exploring that neighborhood thoroughly I made my base camp in Amphitheater Bay. We landed several times in 1909 on Dollar Island where we observed trees uprooted along the shore and the only harbor of safety in that neighborhood being cut through by wave action. In the spring of 1910 I decided to do what I could to protect the shore of this island with stone and if possible save the harbor by building up the breakwater. After constructing a dock, a fireplace and erecting tents, I loaned the outfit to anyone or group of people who would promise to place at least one stone on the shore each day to protect the soil and vegetation or to reinforce the breakwater. 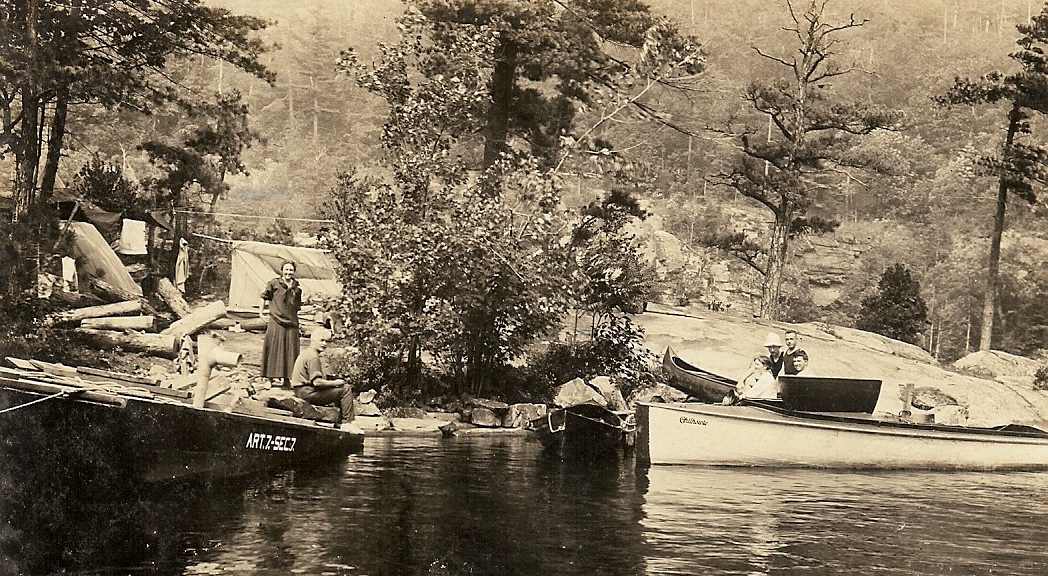 In the beginning most of the stones were brought over from the mainland in our canoe as shown in these two pictures. Large stones were floated over on rafts of logs as shown in this picture and later on my barge, names for that part of our state constitution then Article 7, Section 7, now Article 14, Section 1, was used. This law was adopted and readopted by the people to protect the islands and other lands constitution the forest preserve. This picture, taken in 1916, shows the St. Sacrament Camp Girls using this barge to help protect a state island against damage by high water.

After several years’ work by many individual campers we succeeded in obtaining a gang of men from the D&H Boat Company. They started work on Watch Island, November 20, 1916, and also did some wall building on Gravely Island. These letters, by H.B. Weatherwax, Vice President of the D&H Boat Company, dated November 6, 1916 to me and a letter from me to D.A. Loomis dated November 16th and one from Mr. Loomis of the same date confirmed our verbal understanding that the Boat Company would help us protect the state islands. After failing to obtain an item in the state budget to continue this work we prevailed on Senator Ogden Mills to introduce an appropriation bill, March 28, 1917, #1453 Introductory 1205 appropriating $10,000 for…

The companion bill was approved and signed by Governor Whitman. This copy of letter from Judge Adelbert Moot of Buffalo dated March 26, 1917, to Governor Whitman bears directly on this subject. This appropriation and several which followed were spent on building walls where our past experience showed they were most needed.

One of our first and most difficult problems was to determine the maximum sustained high water level at which we could still protect the state islands. After many observations including the effect on navigation and water needed for docks of other islands with a sustained lake level above top of dam. This elevation was then reported to be 3.15 on the U.S.G.S. Roger’s Rock gauge. The wall building for about 3.5 years were therefore made on this basis sometimes under my direct supervision and at other times after consultation with me on the whereabouts to obtain stone and the location and amount of shore on certain islands to be protected. These letters give some pertinent details on the procedure followed at that time.